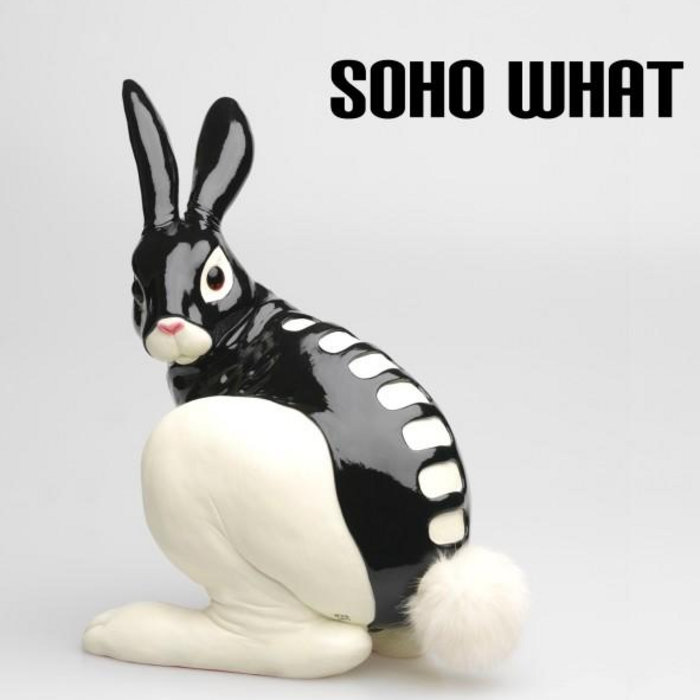 This crazy new project is the brainchild of Rudi Van Mad, cult figure of the well known exp-collective called Larsen Lombriki. This debut album plays w/ genres - with huge attitude and very little respect for musical integralism. Ranging from Pop music ---> to less FM-oriented things [Snakefinger, Swell Maps, The Fall, Neu and The Residents] in a sort of bizarre work-in-progress. 1o great songs of un-classificable stuff, combining a "free form" approach to more structured parts in sort of dada weird-wave. The review that Julian Cope wrote _on his site Head Heritage_ about a promo copy of this record, said: "Singular in a very Electro-Buzzsaw manner is THE FIRST IMPRESSION LAST by Soho What, whose catchy bastard post-punk toons blaze along Chrome-esque shock corridors into intertwining cul de sacs of 39 Clocks- and Metal Urbain-isms, while Transatlantic Faust-style lead vocals conjure up Electric Manchakou sub-sub-French Detroitisms, know wharramean? Imagine A Certain Ratio’s classic ‘All Night Party’ 45 performed over a rhythm of Devo’s ‘Satisfaction’, or maybe the autobahn’n’ice-rink motorik of the Stones’ ‘Shattered’ and yooz reaching the Soho What pleasure centre. Top marks, however, go to the snarling epic ‘She Said’, with its snidey Howard Devoto-meets-Barney Albrecht matter-of-fact vocal and hectic HALF MACHINE LIP MOVES-style Cleveland No Wave machine gun riffing. Hailing from Italy, Soho What is run by one Rodolfo Borsella, who has very little presence on the ‘worldwide’, but – for his classy hybrid of Cleveland, No York, De Twat and London – really should be searched by those interested souls".

Not to be missed.

Ltd to 3oo copies only!

Bandcamp Daily  your guide to the world of Bandcamp

Featuring interviews with the mighty Hiatus Kaiyote and genre-busting L'Rain.